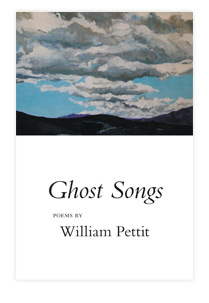 “Ghost Songs” by William Pettit is a collection of evocative yet fleeting poems on the failure and promise of language, love, and faith. They are seasonal meditations on the landscape and on joy and grief. They falter and hesitate, they object and accept. In moment and in verse, the poems of William Pettit are intimate and immediate. The reader falls into a desperate grasp at what’s just passed, putting him or her precisely in the poet’s predicament. And what has just passed? Love is let go, there’s regret, some wind, some storm. The poems are just a witness.

For a larger cover image, click this William poems

William Pettit is a painter and poet. His poetry has been published in To:, Phoebe, and POM. His paintings have been shown in Philadelphia, Rome, and Paris. Pettit lives with his wife and two children in the countryside near Rome. He teaches art at the John Cabot University in Rome, and at the Umbra Institute in Perugia, Italy.

A gifted word smith in total control of his language, William Pettit’s verse compiled into Ghost Songs evoke images and emotions associated with landscape, joy, grieving, and intimacy. A unique and distinctive ‘voice’, Pettit’s poetry is laid out on paper with all the care of fine word paintings. To read his poetry is to experience a kind of meditative articulation that deftly blends mind and emotion. The result is a true tour-de-force of word rhythms and imageries that will linger long after the book is closed and placed back upon the shelf. “Ghost Songs” is especially recommended reading for those who prefer their poetry to both thoughtful and thought-provoking.

William Pettit’s Ghost Songs deftly sketch traces of the human and once-human, once-present, in the landscapes the speaker finds himself in and is shaped by. These poems are landscapes, acts of mind arranged and reactant, geological and cultural, personal and impersonal, always the desiring subject and the subject of d esire: here is a reverence for and appreciation of the provisionality and ephemerality of thought (and of course life) itself. A sense of humor suffuses many of these poems, the embrace of the momentary as momentary, fluid sympathies—Pettit’s lines are shifty, flexible—without will-to-transcendence, in fact, quite the opposite.

The painter grounds his poems in life-material expressively spatialized, always with an eye on “all fallen feathers of the stark season”—landscape as inscape, with the (however muffled) roar of time behind it. Nomentana is momentana: in these poems the now and the names of things shift continually becoming past and present, eroding and evolving, here and gone: “songs to the vanished” for all of us vanishing.

Reviewed by Karl Parker, Professor, Hobart & William Smith Colleges. Karl is the recipient of the 2004 Poetry Award from the National Arts Club, NYC

Since teenage times, I’ve known Bill to be an artist. He pretends to be this, he pretends to be that, he gets away with it, and he always feels guilty about it. He’s gotten away from the boring east coast suburbs of the USA. He extracted himself from indentured servitude in Umbria, Italy. He managed to live in New York City in the late, late nineties without sinking into that money-mad grub. He went back to the Continent and became a gentleman farmer, with dogs, cats, chickens, children, and a woman (can’t say wife because they eschew marriage).

I can’t tell you about the ten years since, but I can assume from his writing that he’s spent a lot of time contemplating his legacy. There is a high-modern pretension about his whole shit, and, if that’s not enough to make you read the forthcoming poems, he also loves nature very, very much. He wishes it weren’t stained so much by his sad memories. If you read real close, you’ll notice that he doesn’t care about nature as much during the last fifteen minutes before he finishes the poem and passes out. The guilt works on him like a native-american wind song, or the diseased blanket.

If you’re having trouble suspending your addled sense of disbelief, pay attention to his sense of humor in these poems. Watch for the sly reversals. Don’t let him get away with them.

There’s also a lot of fun to be had in looking at the way the words are positioned on the page.

In Ghost Songs, Pettit takes a strong draw of cigarette at the weather worn wood posts of an earth valve; standing between nature and the vision of his own fleshly experience. Gone country and expat, he’s no Emerson resident. He took a Baudelaire refinement and left its womb behind for other sultriness. These poems, written between two thousand and two thousand three, are long sittings in an artist’s repose with armor fati and its quiet surrender to personal dissonance and personal narratives. To the degree they are personal accounts Pettit reveals in them both an agitation and serenade from the experience of nature’s expanse against his personal nuances and interactions.

Many of the poems employ the reader to accompany the city’s heart into country shadows. That place where blood meets dirt, meat feeds star, and gnawed bones grind the mill raw; spreading ashes to a chosen home. Recycling in nature’s cycles are city’s conjectures and city sarcasm. Partly languid and at times bilious, his reflections seduce wit slyly across the romantics of country, youth, wine, women, friendship and travel.

“Our glorified bridge: mountain onward / Even the gridded city glows like typed cotton paper / like water in an earthquake circles / like the bricks stacked against us.”

His poems are riddled with references but not confounded by them. They are exclusive but accessible. In the poem “Salt of the Salt of Life” we find historical reference to express a Nietzschean outlook of pain to reality to power, which is followed by an immediate transition into a personal geography and a Fitzgerald metaphor. He conjures ancient architecture to the expression of personal sentiments and philosophic meditations & each transition a poetic movement, a geographic tour. Willing to hope, but dark set against living death; shadows keep spry his new light on the country side.

“March Waltz” is a night’s mind equivalent of Peter and the Wolf. That is, in the sense, that a child whispers innocent adventure to the heart while the spleen grins adult sardonic cynicism. The poem ends: “See that fire / that ghost?” Begetting in comparison that this isn’t a wolf hunted down and paraded jovial; this is a youth aged quiet, not only on the prowl, but on keen watch.

In summation, through country meditations, Pettit journeys across personal continents and takes the reader there in poem and pause. Geographically influenced, these poems aren’t maps; they’re scents just before vanishing (footsteps).

Through the linen & silky clouds

Lay on this table

Show the trees and gullies.

First covered with snow that melts to touch

Then the spring mud

Some hair & some spit

the light rain that stops.

Then the shifting sky, some reddish

sweating at this empty hour.

The tree snuggles with the fox

Over these olive trees, again.

Good Thing You’re Not Here to

Listen to the Nothing

The morning just gets darker, wilts under

the heavy shade of clouds

at rest on the mountain

so even the smoke stays low and grave.

I was about to send a sign, some longing, just to deepen the line

I see the side of you (who never looks directly)

and more comfortable in breadth.

Better to wish than to regret.

Only the gold fields differ

And a dark blue cloud in the grey sky

Where the mountain rocks back.