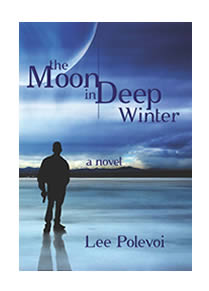 When Parker Sloane returns from a dismal foray into third-world cash-smuggling to his childhood home in the woods of New England, it seems he’s seeing his country and his blended stepfamily for the first time—and finding both just as twitchy, desperate, paranoid and unpredictable as the underworld types he thought he’d escaped.

Before he can even unpack, Parker goes head-to-head with his relatives—his tyrannical stepfather, seething younger brother, newly evangelical mother, and his alluring younger half-sister Rita—and with the demons they never exorcised.

Delicately but disastrously, Parker attempts to keep his family from imploding, unaware that they have their own plans for escape. The Moon in Deep Winter combines the dark comedy of the Coen brothers with the doomed lyricism of Denis Johnson, creating an airtight world of homicidal family dysfunction.

See more about the debut novel, The Moon in Deep Winter at www.moonindeep.com

Praise for a breakout novel

“Lee Polevoi has created an entire world, a world full of surprises, by turns harrowing and darkly funny. His prose reveals a true gift for language, and a deep dedication to craft. Beneath it all is Polevoi’s knack for telling a story, which is, after all, the powerful engine that pushes this novel forward page by page.”
—Gerald Shapiro, author of Little Men

“This beautifully-crafted vision of American homecoming near the end of the millennium is extremely funny and highly unsettling. Lee Polevoi shows us what a truly fragile set of alliances make a family, and what absurdity, intrigue and violence results when it crumbles, its better nature fails at last, and its dark ide grabs the wheel. A wonderful debut!”

—Michael Pritchett, author of The Melancholy Fate of Capt. Lewis

“Lee Polevoi’s arresting first novel begins as a familiar tale of a young man returning to visit the family from whom he’s become estranged, but quickly turns dark, almost hallucinatory. Part thriller, part Faulkner-esque gothic, The Moon in Deep Winter suggests that while you can go home again, you probably shouldn’t.”

—Peter Turchi, author of Maps of the Imagination: The Writer as Cartographer

Sample passage from Chapter 8 of The Moon in Deep Winter

This scene is a flashback showing one of the episodes that led Parker to give up his cross-boarder cash smuggling gig and head back to his childhood home.

The morning after the beating, he woke to grinding pain in every extremity, so pervasive and severe that for a long time he could do no more than blink. Clothes torn, shoeless, alone in a sweeping vista of tumbleweed and scarecrow-shaped cacti. Vultures circled overhead. Blinding sun roasted his body.
El sol acaba con el.At some point a car appeared on the low-slung horizon, rolling out of a dust storm as a Lincoln Continental, black, with dark-tinted glasses, slowing to a stop a short distance away – as if the passengers inside were debating whether or not to get out and help him. What are you waiting for? he thought. Because I can’t fucking walk to you.At last a blonde woman in a nurse’s starched white uniformed emerged from the Lincoln, crossing the torrid desert floor in crepe-soled shoes. She knelt close and spoke to him in the reassuring cadence of his native tongue. He was unable to reply. Instead he let her lift him to his feet like a helpless drunk and guide him to the waiting luxury vehicle; tumbling backward onto plush leather, he fell in love with the nurse’s dyed roots and experienced anew the miracle of air-conditioning. The bull-necked driver never turned around to look.His recovery took place in a small, modestly-furnished room with fringed lamps and a gossamer-curtained window. It was locked, as was the door. Over time he came to understand that the subject wasn’t open for discussion. The Guatemalan housekeeper, a squat dark-skinned woman with scowling eyebrows, vacuumed, cleaned the toilet, never spoke. Once a week he was a visited by a jaunty man in a tweed jacket calling himself Doctor Jones – “Tell Doctor where it hurts” and “Doctor Jones is first and foremost concerned with your health” – and who kept him hopped up on sedatives and massive infusions of vitamin B. Acceptable topics for discussion included small talk about the weather, the state of his recuperation, and a prized collection of South American tree frogs the doctor sometimes brought along on his rounds, rows of tiny green frogs pinned, stretched and mounted in a gilt-frame case.Gradually the medical visits lessened, as did the dulling effects of pain-killers. He listened more closely to sounds outside the window, water trickling into an unseen pool, voices young and old accompanied by flapping beach-clogs and squeaky inflatable toys. Over droning traffic, the syrupy whisper of waves. He grew stronger. Pain receded to tolerable levels. Soon he could hobble to the bathroom on his own – checking the door each time, always locked – wondering yet again who was behind his enforced convalescence and what was expected of him. His true task, he decided, was to stay alert, wait for the day Doctor Jones or the phlegmatic mestizo housekeeper forgot and left the door unlocked. One day, one of them did.A narrow balcony opened to a cobblestone breakfast nook one floor down, with wrought-iron tables and a gently splashing fountain nestled in bougainvillea. There was no one around. Throwing a robe over his boxer shorts, Parker headed away from what he guessed was the lobby, passing instead through a short tunnel between buildings that gave way to a rooftop patio resplendent with sunlight. Gulls flocked noisily overhead. He smelled cotton candy and sun-tan lotion. Beyond a row of beachfront summer rentals, he had a far-reaching view of the Pacific ocean.
A long-haired kid rolled by on a skateboard in the alley below. “Hey!” Parker yelled. “Where am I?” And got a middle-finger salute for an answer.See more about Lee Polevoi’s debut novel, The Moon in Deep Winter at www.moonindeep.com.